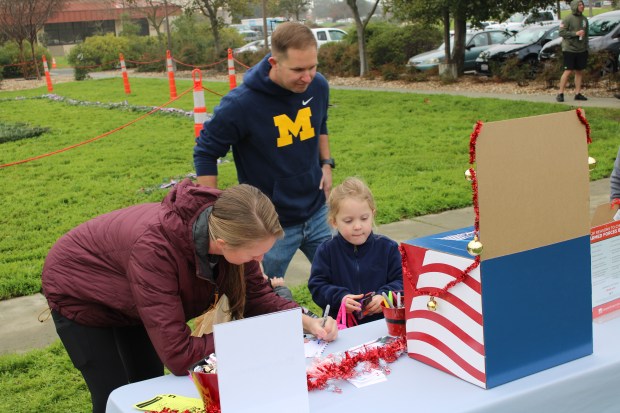 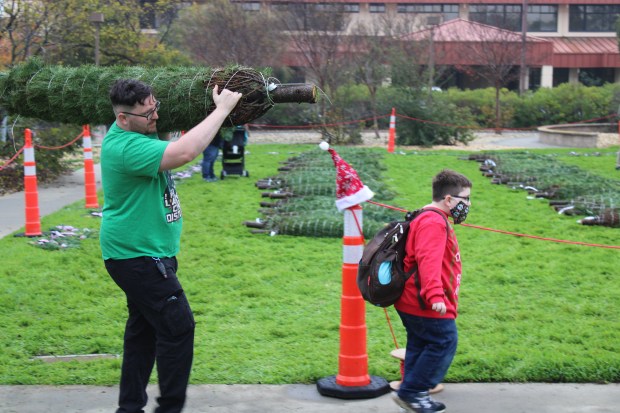 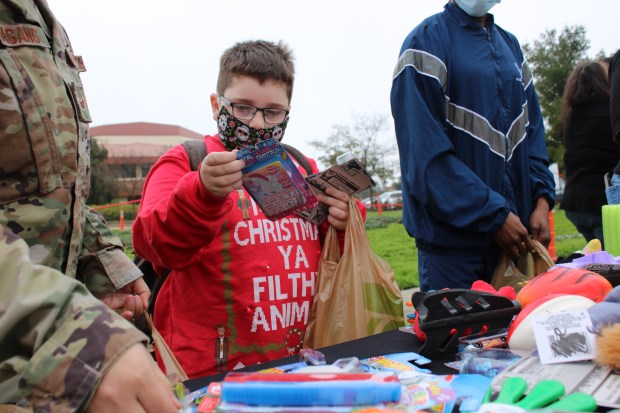 Julian Mirabal guides dad Quentin Mirabal back to the car with their brand new tree, compliments of the giveaway at Travis Air Force Base. (Photo by Corey Kirk, The Reporter)

The dense morning fog couldn’t hide the smiling faces that gathered in the middle of Travis Air Force Base Saturday, as military families that arrived were encouraged to pick out a wreath, some toys and a Christmas tree for Santa to leave some presents under.

In its very first year, the Christmas Tree Giveaway took place thanks to the 660th Aircraft Maintenance Squadron.

Walking the path of trees with his wife and young daughter Mia, Staff Sgt. Jonathon Chavez from Stockton enjoyed getting into the holiday spirit.

“It was a good event to bring people together and had some free things going and nice to have things here and there,” Chavez said.

Posted in front of the 660th Aircraft Maintenance Squadron Buildings, Master Sgt. Randel Moser and his wife Jessica advised they spent three years on the project.. Working alongside FedEx and the Christmas Spirit Foundation, “Trees for Troops,” they were able to bring it to Travis.

“This is something we had at our last base when we were stationed in Illinois, they did it out there, it was something that everybody really appreciated,” the Master Sgt. said. “So we wanted to help out the families here. One, it’s a financial relief, trees are really expensive with the fires driving up the prices and it’s a chance to spread cheer, spread joy and (have) some hot cocoa and books for the families.”

Donning Christmas hats and smiles, volunteers were stationed throughout the event to help with lifting a tree, writing a postcard to a soldier who is overseas and pick out a free toy or two.

Among the volunteers was Staff Sgt. Tomas Chacon from Colorado. He said that, with Moser’s encouragement, he was able to participate with some of the soldiers under his command.

“One thing that I’ve learned from Sgt. Moser … from a leadership perspective, is to inspire people to work for you, don’t force them to,” Chacon said. “I told these guys, you want an opportunity to go do something fun, and you get some great work credit while you are at it, let’s all go do this together and hang out.”

One thing that this event has organized is that 10 families with a soldier currently overseas will get Christmas taken care of as far as decor, some gifts and of course a tree. Coined, “Operation Holiday Cheer,” they were able to deliver all of the stuff to these families Saturday, and as someone that had been deployed three times, Chacon thought that was a great thing to do.

“I know what it is like… I’ve spent two of those deployments over the holidays and away from family. It’s definitely hard to not have someone around to help out with that stuff, so it’s awesome to be able to go on base and pass along some of these trees and gifts that have deployed spouses,” Chacon said.

Wearing a Darth Vader holiday shirt, Staff Sgt. Quentin Mirabal attended with with his wife Jessica Summerlin and their children. He was excited for his oldest, Julian, to experience a real Christmas tree.

“We were definitely excited to get his (Julian) first real tree, it will be fun,” Mirabal said.

Combing through what was available, the family was very content with the wreath-tree combination that they had selected.

“Our main criteria for both were a nice fluff to it, and then to me an addition to the fluff to the tree is also a good base, if it’s very small it’s not going to be able to stay as sturdy,” Mirabal said.

Mirabal is always excited when events like this happen on base because of how kid-focused they are.

“The kids are just excited, and that’s the best part for me. I’ll just see the kids and my son glow and light up and want to take off. For me it’s great. This was awesome,” Mirabal said.

Moser enjoyed seeing the kids getting excited for the holidays, and is easy motivation for an event to continue.

“That’s what it’s really all about, the kids, really, whether they are here or not,” Moser said. “There’s no greater feeling than seeing little kids digging through the toys or walking to their car smiling they got that toy monkey.”

Along with FedEx and Trees for Troops, Moser is quick to thank the Travis Spousal Club, Operation Homefront and other organizations for their assistance.